This past June, I was lucky enough to spend a couple of days at the Field Ornithology camp of Audubon in Maine. Here is the story I wanted to share with you in support of our preservation efforts here in Scarsdale:

I knew it was going to be perfect with Kim and Kenn Kaufman and Scott Weidensaul, three of the most important names in Ornithology today, in attendance as teachers, but who knew I would even learn more about Emily Dickinson ?

It all started when I walked in to the dining hall and was attracted to a newspaper clipping on the cork board. It said a new picture of Emily Dickinson had been found, finally after the one we have all come to see so many times. I thought  “great”, but why Emily Dickinson in Maine, Audubon ?

Interesting enough, the answer came that night when we learned about Hog Island’s history. Hog Island had been an inn till 1910 when Mabel Loomis Todd, original editor of Emily Dickinson’s poetry and her husband bought the property. They were living in Amherst, MA and her husband was an astronomer there.

Later the island passed on to their only daughter who then gave it to Audubon. But Mabel Loomis Dodge was having an affair with Emily Dickinson’s brother and she acquired her poetry when Emily Dickinson died. She would have been about 30 and edited them heavily as the saying goes and is responsible for much of Emily Dickinson’s poetry as we have it today. I heard Mabel Loomis Dodge brought Emily Dickinson’s poetry in trunks and poured over them on Hog Island where the family
would vacation in the summer. One day we hiked to the home they used in the summer. They showed me the desk Mabel Dodge would have worked on, it is still there in what is now called  the “Queen Mary”…They showed me a dusty trunk as well, bearing witness to all that lovely poetry that came to us via Hog Island and now, I who had been to the Emily Dickinson’s homestead in Amherst finally understood how all that poetry that was found after her death, became the poetry books we have…The part that was passed on hastily by the tour guide, came to being. They found her poetry, and then it was published… An affair helped along the way. Birds have a way of connecting the dots…

Our days on Hog Island were just as exciting as that first bit of information. Hog Island was being run by Maine Audubon when it was transferred to main Audubon and programs started all over again. The buildings are now refurbished, many different programs being run, from Field Ornithology to the Art of Birding. Check out http://hogisland.audubon.org for some Fall programs still available among which Fall Migration on Monhegan Island…

The whole island can also be rented for those interested. The week we left a sailing group was coming to have the island for a week.

Hog Island is about 330 acres and is easily reached by boat from Bremen, another Audubon site in a matter of minutes. Once on the island, there are dormitory style rooms, with hot running water and great meals. Most days we were on a boat cruising the bay with excellent commentary by Scott Weidensaul or Kenn Kaufman offering their knowledge on the avian population we were witnessing. Nearby is Egg Island where puffins have been brought back thanks to the novel methods of Steve Kreiss (http://www.audubonmagazine.org), also one of the teachers during our week, and the cover story of the current issue of Audubon magazine.

They are really this small, picture below… We were able to catch them mist netting and then banded them. Once you hold one of these in your palm, you are transported to another dimension of the universe…

Our days started at about 7:00 a.m. breakfast and went on till about 9:00 p.m. with a little break in between. Among the activities:

Here below, a fishing boat in the colors of the sunset:

And these were the puffin shaped cookies at the farewell dinner: 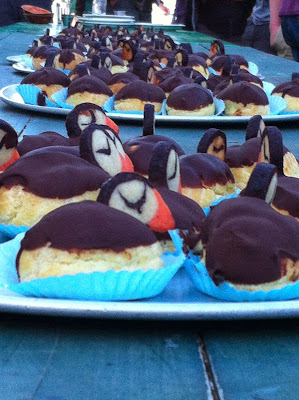