Here is the agenda for the BAR meeting on Monday, February 6th, 2017.

As a reminder this is the mission of the BAR:

The mission of the Board of Architectural Review is to preserve and promote the character and appearance of buildings within the Village of Scarsdale. 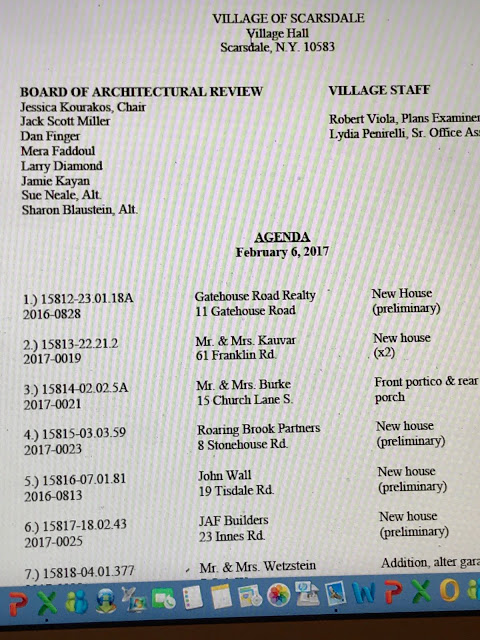 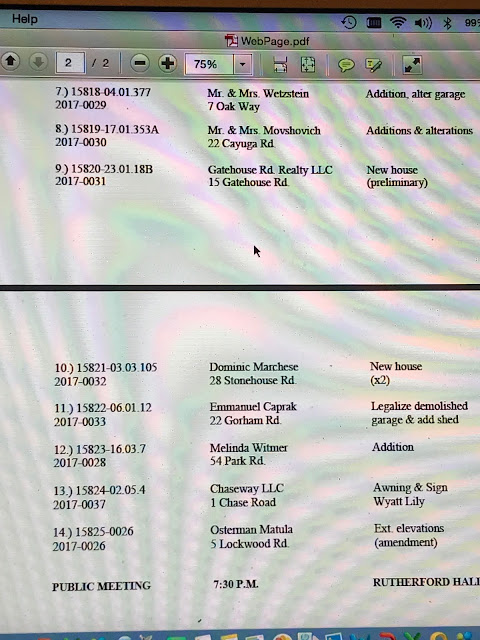 
From the Scarsdale Village web-site:

Members of the Board of Architectural Review should have a professional background in architecture, real estate, engineering, landscape architecture, or building construction.

The mission of the Board of Architectural Review is to preserve and promote the character and appearance of buildings within the Village of Scarsdale.
The Board of Architectural Review meets twice per month to consider applications for exterior alteration of existing buildings, exterior appearance of new buildings, signage and some fencing and impose design conditions to ensure that buildings are designed in harmony with the neighboring community.

Last night Sharon Blaustein was the alternate for Daniel Finger ( I think ). Relation to Carl Finger, anyone ?

I also noticed Larry Diamond on the dais. The family resemblance with Paul Diamond struck me as obvious.

I think Jack Scott Miller served on the CHP before. They must believe in recycling when appointing officers. What happened to fresh DNA ? No one wants to "serve".

Again no indication as to when these people were appointed, who appointed them and no biographical sketches. They serve, but there is no contact information. Who do they serve ? Themselves only ? If not, why all this secrecy ?

Last I exchanged e-mails with Rob Cole from our manager's office he was " beginning to process the request" on January 13th. We are well in to a new month and still no sign of e-mail addresses on the Village website. We know there are members of the VB who create new e-mail addresses for their public personae and never check them. But even that, they do not want to disclose. Secrecy, again and again...Hide, hide, hide.

Get Lena to serve and hide. Husband and wife team. Ever heard of the Brodskys ?  Both lawyers. She was Trustee, he was on the Procedure Committee. They sold 5 Burgess to Ben Simon and left for the West Side of Manhattan. When you have been some place for 25 years you begin putting the dots together. Bobby of Kos sold it in 2016 fro $5.85 Mil. They sold it to Bobby for $1.71 Mil. in 2013... according to Zillow. Bobby was the only one attending those gravel meetings with Lena. Bobby argued over and over again against gravel surfaces counting on the surface area. He came to meetings, the Inquirer published his letters. The Inquirer censors most of my letters, certainly anything critical of the VB or the developer status quo.

I could not find any recent minutes of the BAR. Maybe it too is in a secret location on the web...

I have asked numerous times for an overhead projector so the audience can follow the presentations. No, they have not bought none. Of course, who would want to have the audience involved ? Resident averse theme rules. No money for an overhead projector, but plenty for a library that needs no renovation. I hope they are also planning for a helicopter pad for the library. You will need your own helicopter to get there. Our roads are that bad.

I could not follow most of the houses discussed last night. The presentations were all again directed to the members of the BAR with their backs to the audience.

I saw Farley Baker come in. I do not know how long he stayed. Bana was there presenting.

Jessica's comment on 23 Innes: Setbacks are ridiculous, beyond my purview...Beyond your choice certainly. 23 Innes is a huge monster. Mr. F. decided to diverge from his card houses, now there is a big mess of stone. This is his son's little project, Mr. JF. His "architect" looked lost.

There were neighbors who tried to negotiate some style, some decorum. But where to start ? Synthetic slate should be a good starting point. Why not real slate ? No. Mr. SF told me he has a family with five kids to feed on Heathcote Road. My heart goes out to him.

If Jessica Kourakos, is the Jessica that Google tells me she is, she was appointed in October 2015  Senior Vice President of Investor Relations for Imax. I fail to see the architectural connection. It must fall under artistic license. But then again I may be wrong. There is no biographical information on her,  or any other member on the Board, or for that matter anyone else who "serves" on these Boards ( boreds ? ) . Wonder why ?....They can't say I did not ask. Secrets again. Only thieves hide.

They want to "hear" us, but they do not want to listen. As Millicent Kaufman told me so many times: Our pleas fall on deaf ears. Or, should I be politically correct and say: hearing impaired.... politically correct but incorrect in every other way. Veneer and nothing real.

All I observed was Jessica was still learning what a mullion is. Makes for a great background !

The meeting started at about 7:30 p.m. and was not over till 10:00 p.m. Everyone was tired and dismissive by the end, when my new neighbors' house 5 Lockwood Road  came up. But I will write separetely to the VB on that...It deserves " special attention".

Jessica tried to mend patches at the end. She had said earlier that she was familiar with my website. Now she said "It was nice meeting you in person". But both she and I knew the ship had sunk, possibly irrevocably.

61 Franklin wants polyurethane on the facade to look like stucco...23 Innes will be putting synthetic slate... Who ever heard of synthetic slate ? I certainly had not. Yesterday, February 7th, I drove to 23 Innes, a separate post will follow shortly. But I saw, that 23 Innes had a slate roof, plenty of stone on the facade and even a false pigeooniere...

Just like who ever heard of the British making fighter jests, let alone selling them to Turkey for Millions of GBP ? Click here, please.Please make America great again. Magic wand anyone ?

Jessica wants modern buildings in Scarsdale. I guess with her busy career, she has not had yet time to read the mission statement of the BAR. But I came in to the meting late. I am sure she must have reminded everyone of the BAR mission at the start of the meeting. We'll see when the minutes get approved- somewhere some time in some secret location. This is serving Scarsdale, a town, in the USA, in 2017. This is what it has come to...

The guy who owns 19 Tisdale wants to replace it with a big modern house. He likes modern houses he said. I replied you should move to New Heaven or New Canaan, one of those new places and leave Scarsdale to those who appreciate it. No, I tried to behave. I did not say all of that...

I want my Eiffel Tower in my backyard. Watch for my application on the ZBA and then the BAR soon after.

From the Village Board, Deb Pekarek was there for the longest time, maybe all of 15 minutes. Marc Samwick and Carl Finger made brief appearances. They certainly did not want to see me... Wonder why ?

As I am writing this, I am listening to the forecast for the next few days. Rain today temperatures in the 40's, tomorrow the high will be 58. Thursday snow and 34 degrees. Any connection between all this reckless building, cutting trees and our climate, anyone ? All these wild swings in temperatures ?

La Nina is out. Forecasters predict December-February will be warmer than November-January. From weathernationtv.com

Have a good day everyone!