Consultants for Assessor's Office, another Non-Profit... 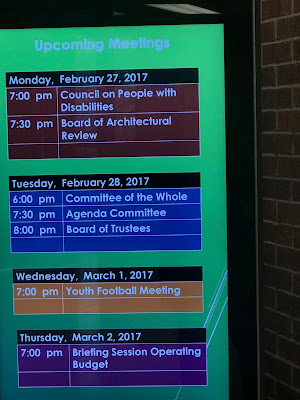 Tonight a meeting of the BAR with 24 items, more on that in a separate post later.

The Village Board hired consultants to investigate organizational aspects of the Assessor's office.

The Board of Trustees of the Village of Scarsdale will meet as a Committee of the Whole on Tuesday, February 28, 2017 at 6:00 PM. The meeting will be held in the Third Floor Meeting Room in Village Hall. Agenda 1. Organizational Assessment of Town/Village Assessor’s Department

Why do they have to assess the Assessor's Office ? Who is assessing the VB's performance ? The Assessor did what she was told to do, no more no less. Why did they order a second reval in two years ?

They can't accept the blame, they hire consultants to dissipate the blame and make it focus elsewhere.

Another reason this system is not working. Thank goodness, they are out in a couple more weeks. What will come does not hold much promise either. The CNC slate or the other one. The system is flawed. We need total revamp. That is where consultants are needed. Not to cover up their mistakes.

The resident gets up, talks, complains. She or he has a genuine complaint. They just shuffle paper, sit there until the next election. Some make politically correct statements, but say nothing. They just want the vote, the power, to be able to say "I was trustee in Scarsdale". We become a line on their resume...

Little will others know, they delivered nothing. I agree, it is a big job. But don't accept it,  if you have accepted it, deliver. If not, make provisions for others to deliver. To do nothing in 2017 is to go backwards. The world is spinning at a rate it has never done before. This is the age of global competition in everything. Our VB thinks it is still 1908... Houston we have a problem ! No, we have many problems !!!

This past week, another letter asking for solicitations. You know from who... The defunct Non-Partisan party. They are so clueless, they are sending me a solicitation envelope when they should know by now, I am totally unsupportive of them. Wasting money. Their specialty.

Another year, another wife and husband team. One goes another grows.

I will remember not to vote. 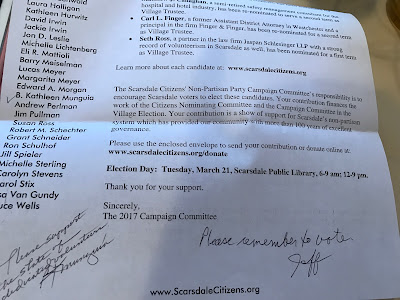