The meeting started at about 8:00 p.m. after we all rose to recite the Pledge of Allegiance.

Here it is for those who wish to be reminded of it:

"I pledge allegiance to the Flag of the United States of America, and to the    Republic for which it stands, one   Nation under God, indivisible, with liberty and justice for all."

They keep on destroying this place one meeting at a time, every night at Village Hall. Tuesday night was no exception. Trustee Callaghan showed some independence. He did not show up at the meeting. I hope his sickness was just sickness being with this inept, incompetent, complacent bored Board. At least, there is still freedom of speech...

Here are pictures from Village Hall at 8:11 p.m. Tuesday night and at 8:12 p.m. respectively.  As you can see Rutherford Hall was fairly empty. This the part they do not show in the televised version. For me the most interesting part. In attendance were the candidates running against the CNC slate, the CNC slate minus Callaghan. Seth Ross was in attendance pondering his decision for candidacy and the wisdom of it all, as usual. There is still time to jump off. 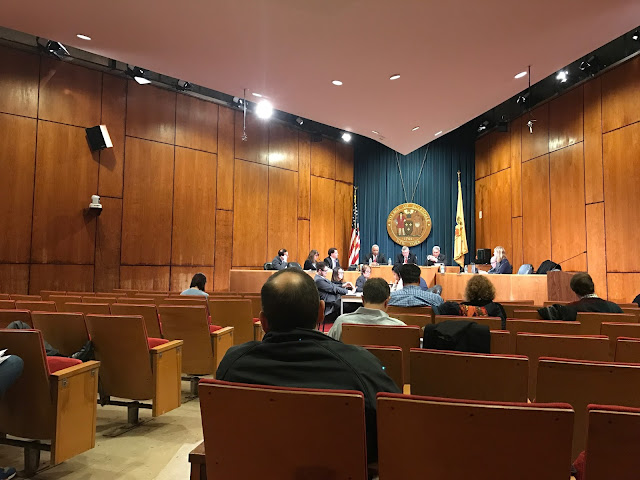 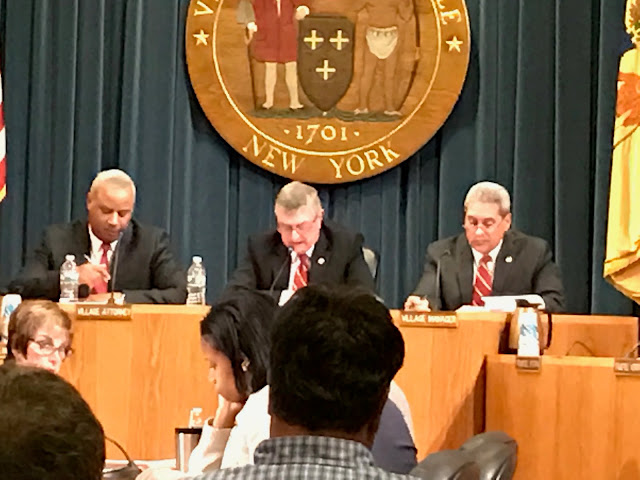 Obliging to a statement made by Ms. Mayra Kirkendall-Rodriguez, the Mayor read a statement about immigrants and how they are welcome here. Had he really remembered how one immigrant washed ashore almost 40 years ago,  has been causing him and the Board so much grief, maybe he would have revised his statement. No, this eluded him. Instead we got off to lofty ground with Trump and all the rest, as though we have no problems here. You can read his statement here on the Scarsdale10583 site:Click here, please:

They talked about the Freightway site and how they requested RFP's for the site. A Request for Proposals (RFP) is out. Of course, they have all the other problems figured out. Complicate matters... First solve the existing problems, before you get yourselves into more muddy waters. No, complicate, compound, confound and confuse. Instead of solve, clear and legislate. No delay and procrastinate. Create road blocks to a better Scarsdale.

For the next 20 minutes the Mayor just read from his notes on and on and on. Watch for yourself if you have the patience on CableTV streaming all day long or read it all on the link above. They have hired a firm to review the Assessor's office. There will be a meeting with them on Tuesday February 28th at 6:00p.m. before the  VB meeting. In the meanwhile taxes will become due in April. What will happen ? We will not pay any taxes ? We will pay per old assessment ? Nobody knows. At least this is what I was told...

They had an inordinate number of agendas printed waiting on the table to be taken by attendees. As I stated before, there were very few people attending. They could manage their resources a little better. Being green on the screen is fine, but you have to be green in reality as well.

They decided to pass a resolution just in case they go beyond the tax cap. So that if they do go over, they do not face penalties. Something like this. Another license to spend more it seemed like...Robert Harrison got up and talked. I hope one day he will acquire the skill to be a little more succinct. Until then patience to us all. And all the power to Platinum realty. They are taking over the town. You will do even better, if we conserve this Village. No, you want to knock down houses and build as well.  No end to greed. Sorry, I almost misspelt and wrote green... True though there is no end to green...

Robert Berg, attorney residing at 32 Tisdale spoke about our ever increasing taxes and how it even achieved a spectacular increase of 25 times the CPI. He should read my entry here about us subsidizing the education of our volunteer trustees. Click here, please. At this rate, it is amazing our bills get paid. they just keep on hiring consultants for every task imaginable. What happened to their brains ? ....Delegate so they do not negate. Say "yes" to all, to increase their political base and then not deliver to anyone like so many before and I am sure after them as well.

You heard about the messenger with the bad news. He got killed first.

Soon they will even be able to hire me me as their next consultant at the rate of $ 1 Mil. a day. In a budget of  $ 55Mil. it should be peanuts.

The Mayor complained that it was taking too much staff time to respond to FOILs, especially to Ms. Kirkendall-Rodriguez's, and of course mine also lately. Well, had they done their job right, there would not have been a need for all this waste in the first place. No sympathy there, sorry. You should be asking for apologies for wasting so much of our time. Why the Ryan Reval in the first place ? One sentence to justify it ? I have not heard of any.

My FOIL request from the village clerk is missing as well, even though I rushed and filled the on line form last Friday, February 10th. Looking forward to receiving the file any day now.

The Village Manager talked about the recent weather and how it affected our Village. Right, but what about all this development craze going on for so long ? Defacing and destroying our beloved town. What are you doing about that ? Nothing. Even facilitating a quicker process to destroy. Have you put in legislation to stop all this ? Nothing. I am still waiting for his reply to my email to show me the changes to  Village Code Chapter 182. The CHP decisions as of this morning at about 6:00 a.m. is still frozen on the September 20, 2016 decision. They manage to freeze the CHP decisions, but can't manage to freeze our Village and stop development. The list is six months behind. Why ? I do not know.

Mr. Pappalardo talked about his staff and how they are always on the lookout for any grants that our Village may be eligible for. I know they work hard. It is the volunteer bored that is the problem. They do not get paid and they do not perform. Nothing. But doing nothing is of course hurting our Village. Our beautiful houses are getting demolished, getting replaced by greed laced cardboard and plastic replicas. Or should I say synthetic slate and styrofoam stucco ? As in 23 Innes and 61 Franklin, currently in front of the BAR.

The Board members get free tuition. They learn ( hopefully)  on the job. We  pay for their tuition in exorbitant taxes. We become a line on their resume. "I was Mayor of Scarsdale", "I was Trustee of Scarsdale", at such and such a time, etc., etc. Story of our lives thanks to some Scarsdale attorneys that devised this system years ago. The Bard from Stratford-upon-Avon (1564-1616) had it right. Look what he said more than 400 years ago:


Shakespeare's exact line ''The first thing we do, let's kill all the lawyers,'' was stated by Dick the Butcher in ''Henry VI,'' Part II, act IV, Scene II, Line 73. Dick the Butcher was a follower of the rebel Jack Cade, who thought that if he disturbed law and order, he could become king.

Then the meeting was opened for public comments. Robert Berg as well as Bob Harrison obliged. A man from the Taxi Service got up and talked about Uber and how they are taking over their business. He was happy that Scarsdale has regulations allowing them to continue to operate.

I did not intend to talk. But by the end of the meeting we had heard  so many times about their complaints about the budget and how they had fixed costs like the pension funds of the employees, etc. etc. that I felt I had to get up and talk. Marc Samwick pleaded and said he wanted our help.  Carl Finger was equally lost. Well, for a starter I suggested they hire another consulting firm to consult them on hiring the consulting firm they have hired to examine the Assesor's office. They fail to grasp a cause and effect relationship here or anywhere. If they only stopped hiring consultants right and left...

No, they spend the money we do not have. Then our debt service rises and rises...They agree to renovate the library when our roads are in terrible condition. I said I hoped they will authorize a helicopter pad for the library as well.

No, we cannot drink our water, we can not drive on our roads. They approve millions for a superflous renovation. They hire consultants right and left. They even want to raise our tax beyond the tax cap. Houston, we have a problem ! That was the astronauts. We have many problems !!!

At about 10:00 p.m. I finally could not take any more of this and left the circus.

Now I have just discovered you can watch the whole meeting here, right from the Village website:Click here, please. I did not have a chance to view it all, yet. So, I probably got a 100 things wrong...

It is wonderful that our Village is so up to date in these matters. If only I could get them to preserve the old and be up to date in this matter also. Full proof that they can  keep in step with the times if they so choose. BRAVO !!!