I wanted to just communicate my sentiments after a very successful evening hosted by the League of Women Voters of Scarsdale where we heard from all candidates running in this year's election. Such a breath of fresh air has not been felt in Scarsdale for a very, very long time.

Here are some pictures, first the moderator Karen Schatzel and the Trustee candidates and then the Mayor candidates. 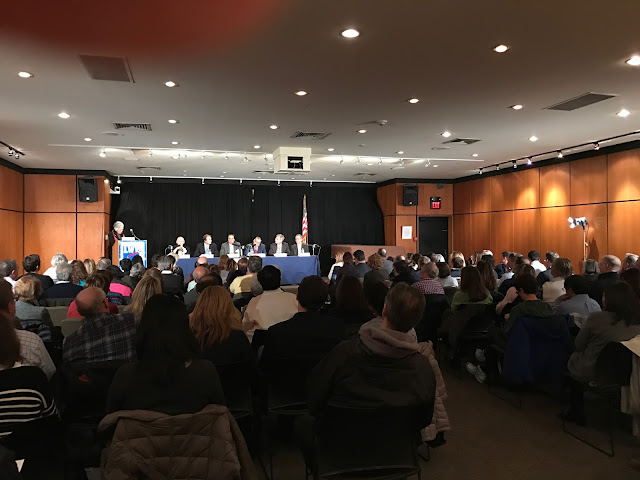 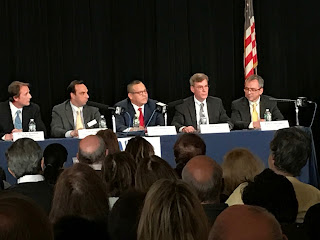 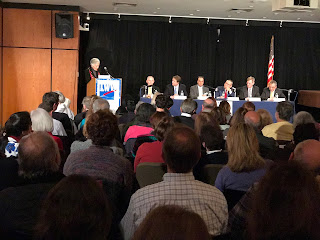 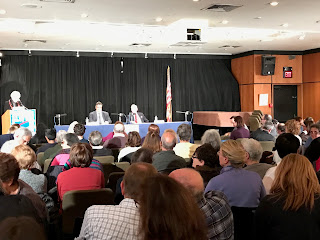 As you can see from the pictures, the room was at full capacity, probably about 200 -250 attendees. When I arrived at 7:45p.m. the library parking lot was full and I had to park at a nearby street.

Selvaggio talked about his expertise being an economist and a modeler. He reiterated  that he would have seen the Ryan problem coming and now they think that they can void it. Well, this is not possible I was told by the Assessor's office. We all will be paying our taxes based on the Ryan reval, if we have not grieved.

Taxes were a big issue with the Berg team as he has talked abut this many times before.

Steve Ross said he was proud of the way he dealt with issues while he was on the Planning Board. What I remember was how callous, insensitive and canned he seemed all those times. He continued in the same manner.

Berg and his team came off genuine, caring and engaging.

Thank you for a great presentation.

Good questions from the audience and a great moderator who calmed the stormy, charged atmosphere with her poise.