Last night there was a Capital Budget briefing session on the third floor of Village Hall.

The first picture is of the first floor hallway electronic calendar. I suppose I could call it that and be politically correct...

When I took the second picture below, Trustee Veron had not come in yet, my apologies to her. But she was in attendance along with Trustees Stern, Pekarek, Callaghan and our Mayor Jon Mark.

Trustees Samwick and Finger were absent. When the meeting was over, it was past 10:00 p.m. A few left before the meeting ended. 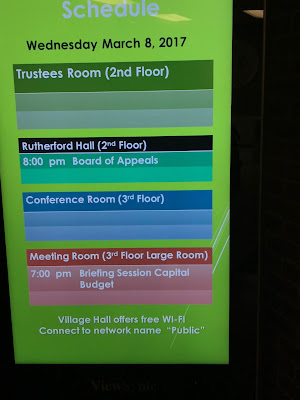 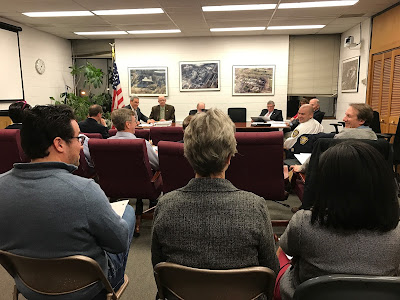 I took the second picture from the back of the room. So, this is all the attendees. You can see the Fire Chief there in the first row. Trustee candidate Brice Kirkendall-Rodriguez, Mayor candidate Bob Berg, as well as Bob Harrison were there. I did not see Mayor candidate Dan Hochvert. Steve Ross was there as well as Justin Arest and a woman I have not identified yet.

Village Staff from Manager's Office as well as our Treasurer Mary Lou McClure were present. I still can't remember how long it is now that Steve has been our Manager. I asked them to put biographical information on Staff as well as Trustees on our website. No, they said.., I  suppose it is classified information. May be soon, after Communications reviews it... Government bureaucracy. That is what we get for democracy in this town.

Just to give you an idea, here below is a picture of page 1, of the Budget. I know it is sideways. It was presented in this form as well. The Capital Budget is a $ 6,813,000 budget as adopted, even though the requested budget was over $12 Mil.

But I just wanted to share how dense it was, how many items, how much to talk about...16 pages like this.

Bob Harrison wanted to talk about the tennis courts. I wanted to talk about the frayed upholstery. I could not. They said: "Steve does not have heat" . Do two wrongs make a right ? Why can't we even keep our Manager warm ?  I am sending them the name of the insulation contractor we used a couple of years ago as well as another vendor for reupholstery. You think we will get new chairs soon ?

Somebody mentioned the windows were single pane. You cannot heat the house if, you are losing all the heat through windows, roof,  result of poor or no insulation. 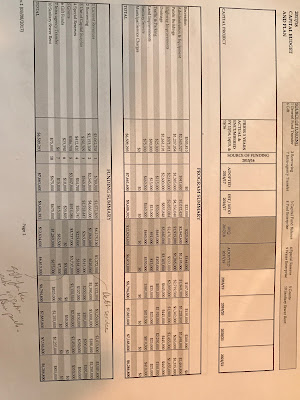 Bob Berg along with many others wanted the roads taken care of. No, again !

The swan song of the Trustees is this Budget. Why do we have to live with poor roads for another year ? Not acceptable.

Are they doing anything about the Big House / Old House issue ? I am calling the Big House issue, the big, huge houses being built on small lots and the Old House issue the old houses that are being demolished, the character of our streets going out the window problem. They spend $15,000 a year and we become Tree City USA ! Who is counting all the trees felled ? Where are they planting all those trees ?

When are they going to address this Big House/ Old House issue ? There is a Land Use meeting to discuss the Freightway project. As though all else is smooth sailing.

The Library Capital Plan was another Budget of 3 pages in similar dense format. We will renovate Supply Field while the new Library is being built. Supply Field 2nd Floor construction will cost $ 750,000 alone and we cannot keep our Manager warm or our meeting room chairs in decent shape...

Have a good day everyone !

P.S. I was talking to Bob Berg after the meeting as he mentioned the next meeting they would have before the elections. There will be a Voters' Choice Party Town Hall meeting on Wednesday March 15th, from 7:15-9:15 p.m. at the Scarsdale Congregational Church at 1 Heathcote Road. All welcome.

Here is more information on them: https://voterschoiceparty.comHere:

He said the Scarsdale Inquirer wanted to hold a debate before the elections, but the candidates on the Non-Partisan slate did not want to have it. I guess they prefer to hide...The preferred way of communications of the Non-Partisan system and this slate...