The Village Board met with two firms who in concert offered to provide their services to assess the organizational aspects of the Assessor's office. The staff felt they had to do something like this to "restore confidence in the office". Their words.The VB did not vote last night. The Mayor said they would "mull" over this and announce their decision at a later date. I suppose mulling happens over e-mails we do not see, since their meetings have to be public or else in executive session.

Pictures from the meeting with the firms: 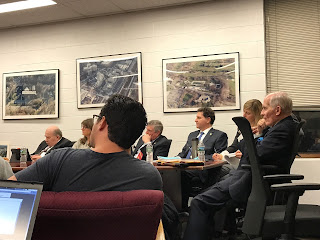 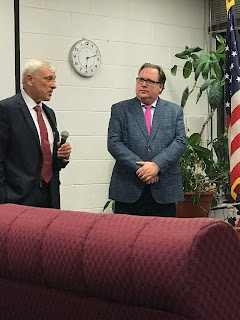 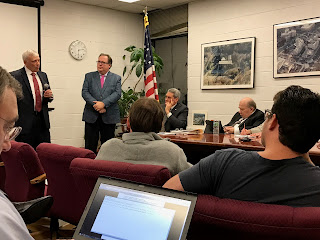 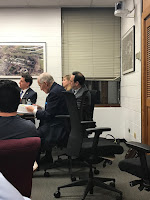 The VB got their picture taken: 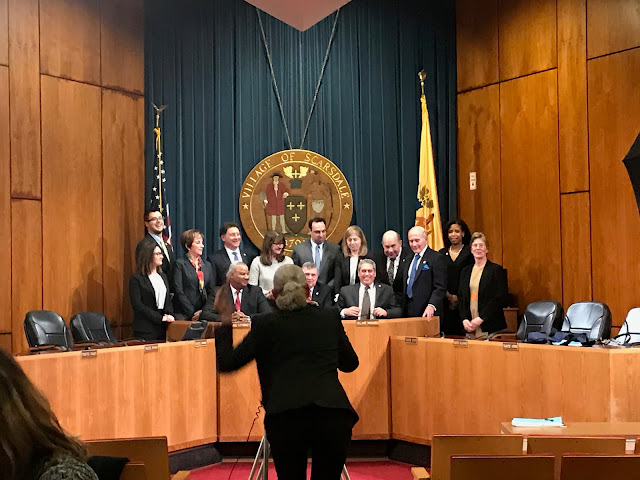 By Joanne Wallenstein of Scarsdale10583 as well: 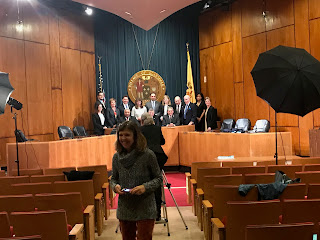 You FOIL e-mails, they do not release them till 45 days later. When all is said and done. Some justice.

Steve Papalardo said the hiring of the consultants would be budget "neutral". They will spend money, but it will be budget neutral. I did not like that at all, nor do I understand it. How much of it is neutral ? What if they end up spending $100,000, still neutral ?...

Then there was the Agenda meeting where parts of the VB meeting to start at 8:00 p.m. was discussed.


We learned from our Treasurer Mary Lou McClure, that contrary to popular belief that sales in Scarsdale determines the tax amount we get from the county, we get an amount proportionate to our population.

The county appropriates this based on population. Of course, if you shop locally, it is good for the vitality of our downtown, but it does not have anything to do with the money we receive. That depends on aggregate spending and population. We get a check from the county quarterly based on the sale taxes collected.

He just takes the train to the city and must not have any idea how awful our roads are. To dismiss this and say that it is a recurring problem not worthy of addressing is wrong as well. Poor housekeeping. You go out and spend money on a library, but have no money to repair our roads that is not acceptable. You do not build an addition if your basement is flooding or your roof is leaking. It is the same issue here. They have their priorities totally wrong.

There will be a budget meeting tomorrow. We shall see more about this there I am sure.

Then Robert Berg got up and talked. And then of course Bob Harrison. He went on and on, even though the bell signaled his time was up. No, he still carried on. No discipline. Why can't you stop this man wasting our time ? If he has time to waste, we should not be obligated to hear his tirades week after week.

At least, during last night's meeting, the atmosphere was a little more relaxed, laid back. I got the sense that finally the Mayor was comfortable with his position. Of course, these are his last few meetings. There was a little conversation between citizen and Mayor. That should have been the case all along.

Another reason why this system is flawed. The chair of the BAR serves three years, the Mayor one. Totally wrong. By the time the Mayor warms up to his task, he steps down. The new guy comes in. Weeks pass, before the dynamics of the new Board click. They do not get anything done, except approve firemen's tenure or leaf blowers for the season.

Everybody left after the public comment session. Why stay ?

I learned 53 Old Orchard Lane is appealing. They are claiming hardship Wayne told me. Of course and I am claiming the VB is sleeping on the job. Thank you very much ! What a way to govern in a town so desperate for leadership !

Volunteers who do nothing on the job, I am coining a new word for them: nolunteers. They are no good. Full of them in our Boards.

Who is going to save Scarsdale ?

For more facts and the ads go to Scarsdale10583.com.