Guess who was there, digging and working away Friday afternoon at 5:30 p.m.:

He said he had to finish up what he had promised to do and that was what he was doing. Hurray to our Mayor ! Such dedication and service cannot be matched. We are so lucky to have him ! 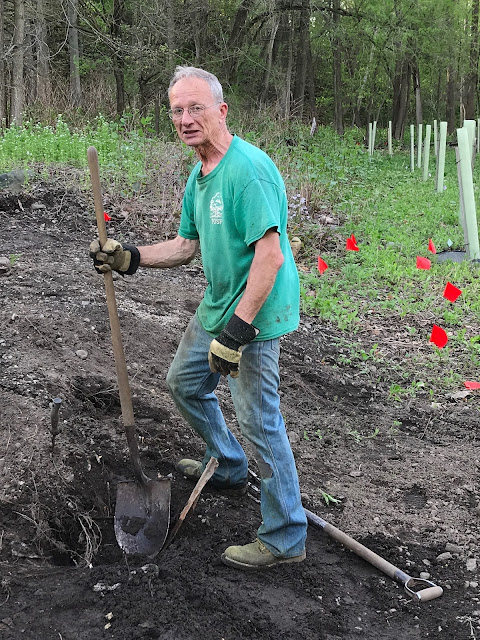 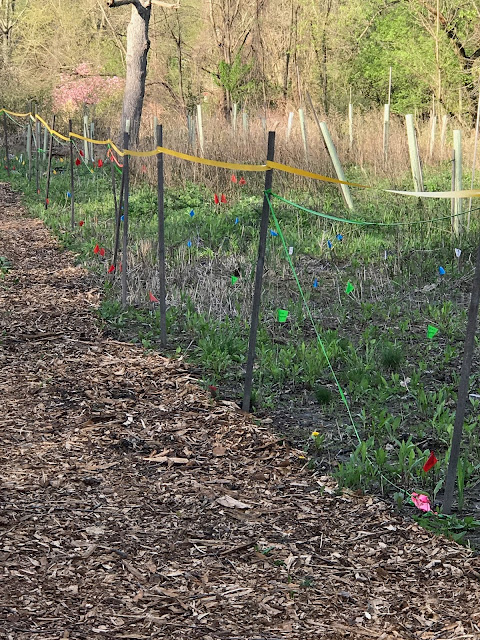 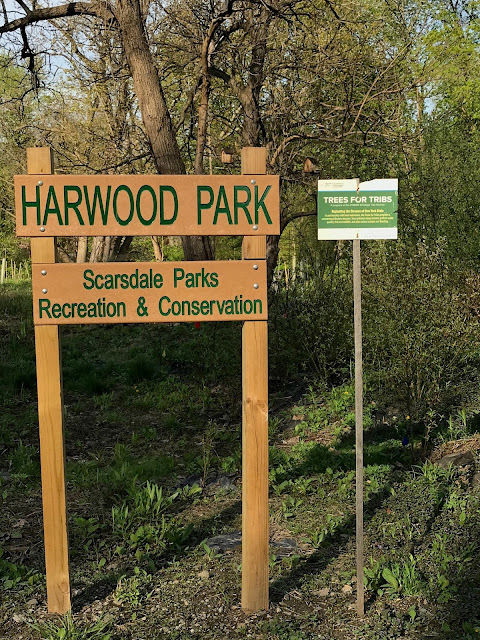 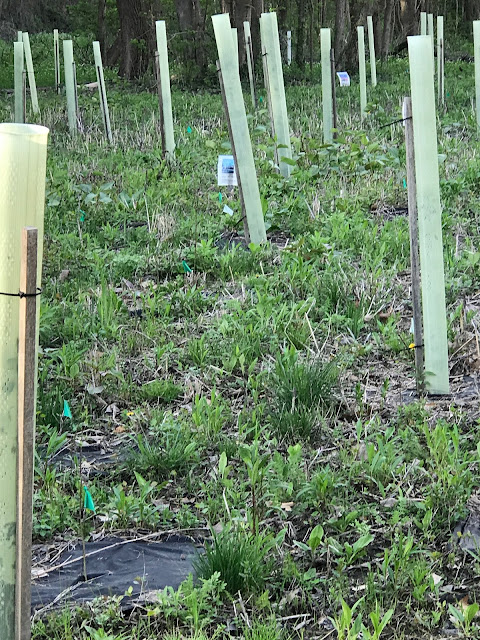 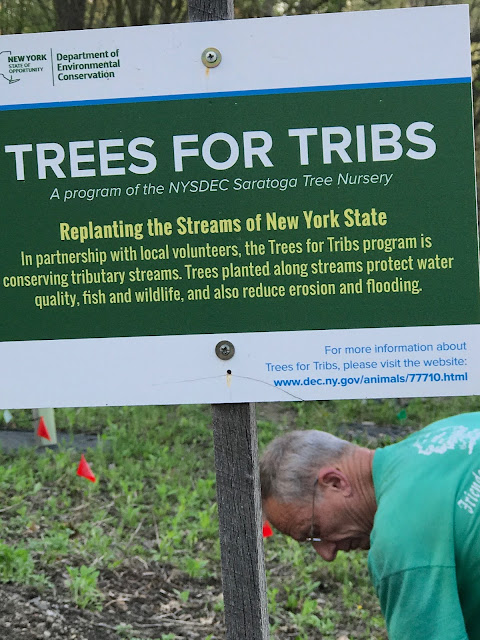 This is tulip island in Fox Meadow. Harcourt Road and Brewster Road. 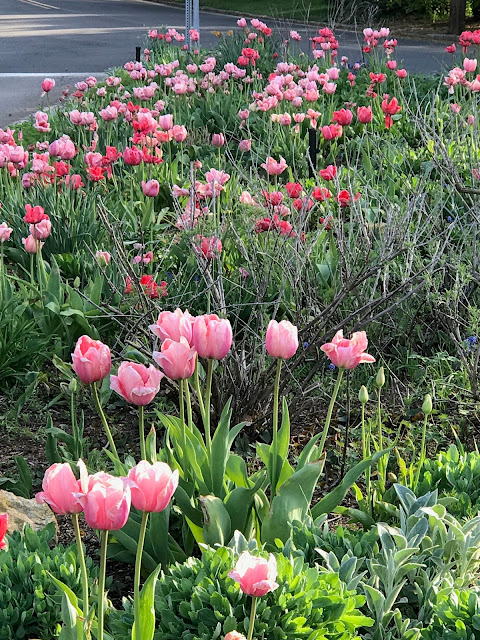 Here is the announcement from the Recreation Department:

Here we go, one more time, especially for those of us who did not get any last time:

Back by Popular Demand: Free Food Scrap Compost & Rain Barrels!
Thanks to everyone that participated in our Earth Day giveaway of free compost and rain barrels! Because the event was such a huge success, we’re bringing it back for an encore performance on May 06, 2017.
The Village of Scarsdale is once again making high quality food scrap compost and rain barrels available to all residents for FREE on a first come, first served basis! Simply bring a pail, bucket, or other receptacle to the Scarsdale Recycling Center, 110 Secor Road, from 8:30 a.m. until 3:00 p.m. on Saturday, May 06, 2017, and take some compost home!
High quality food scrap compost material is being provided pursuant to the successful Village of Scarsdale residential Food Scrap Recycling program, which now has over 550 pioneering participants that have recycled over 26,000 pounds, or roughly 13 tons, of food waste since the beginning of the program in January 2017. Impressive, indeed!
We would like to reach 1,000 participating households during the program’s first year, so don’t just simply spread your compost, help spread the word! Bring a friend to the event and s/he will not only learn about the program, but can also get a food scrap recycling kit on-the-spot. Additional program information can be accessed here: http://www.scarsdale.com/495/Food-Scrap-Recycling.
The food scrap compost can be used in one’s vegetable garden, flower beds, or to enrich turf in place of chemical fertilizers. As noted above, FREE rain barrels will also be available.
The Village of Scarsdale Food Scrap Recycling program was formed through community collaboration, with program implementation guided by the Committee on Food Scrap Recycling, comprised of the following members: Benedict Salanitro, Public Works Superintendent; Ron Schulhof, resident volunteer; Tyler Seifert, Assistant to the Public Works Superintendent; and Michelle Sterling, resident volunteer.
###

Last night there was a meeting of the Freightway Steering Committee in the Trustees' Room in Village Hall starting at 7:00 p.m. promptly. 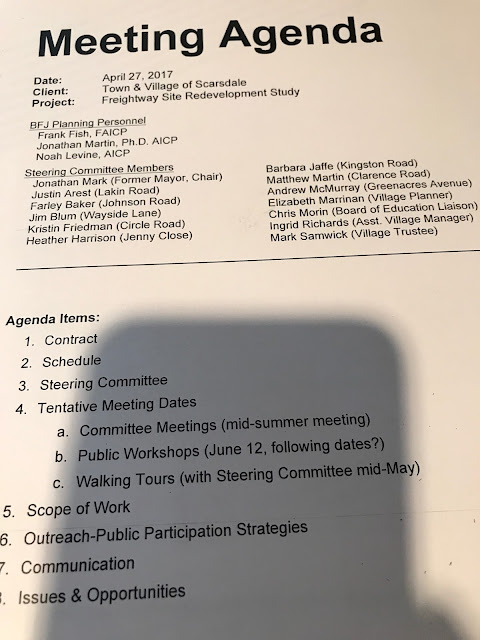 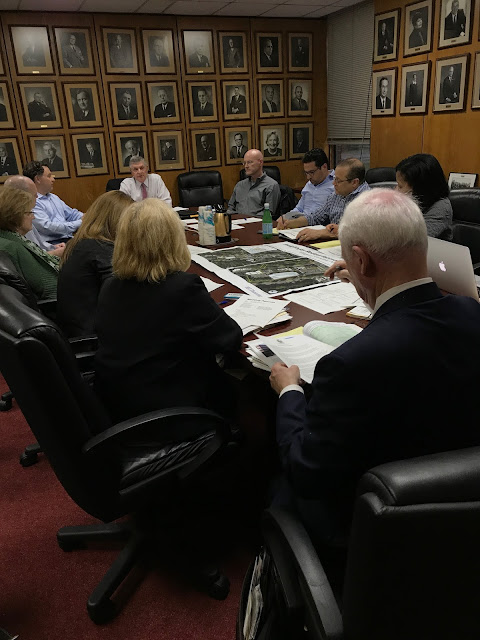 In attendance, as you can see partly from this picture:

Former mayor Jon Mark, chairing the meeting then, all of the above on the agenda except: Kristin Friedman, Andrew McMurray and Chris Morin who could not attend. ( I hope I got this right, since I arrived late by a couple of minutes, the meeting is not recorded, please report any inaccurate information ).

In the picture, to the left of Jon Mark is Farley Baker, Justin Arrest, Jim Blum, Ingrid Richards. To the right is Marc Samwick, Mathew Martin, Barbara Jaffe, Heather Harrison, Liz Marrinnan and from BFJ: Frank Fish and others I could not include in the picture.

My apologies to those I could not include in the picture. I try to be as unobtrusive as I can taking pictures and at times this means I cannot take everyone. I will try to equalize exposure at the next opportunity.

Those around the table, are the ones on the Committee and then there were the following in attendance as well:

First, all the committee members introduced themselves with a few sentences:

From BFJ, Mr. Fish talked about various current challenges to keep in mind, such as; the fact that UBER is replacing people driving cars and soon there will be autonomous cars, so parking will not be such an issue. Shopping on the Internet is replacing retail and that millennials like to be near transportation. He thought it best to design a flexible structure with flat surfaces, so that if a garage became obsolete in the near future the building could easily be converted to residential.

Trustee Callaghan sitting next to me told me he remembered when Heather Harrison was born and that they had been friends with her parents for a long time. It is such connections that make our volunteers' work invaluable- when it works- it is great. I know I have been critical of our volunteers' work, but it is only because I want to see this town be better and not be engulfed in concrete. Unfortunately too often, we seem to be focused on immediate returns and do not take a more prolonged view with delayed returns. In the long term we want this Village preserved and not taken over by mega-mansions or be a victim of the real-estate industry.

In this vein, I hope this Freightway report will have a green component not only in green design, but also in physical green terms with plants, shrubs, year round vegetative interest, maybe a water fountain or so which brings to mind these pictures I took in Europe last summer and this past Spring: 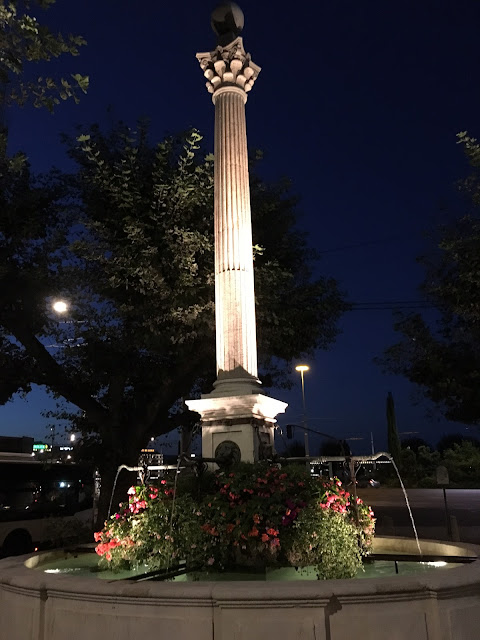 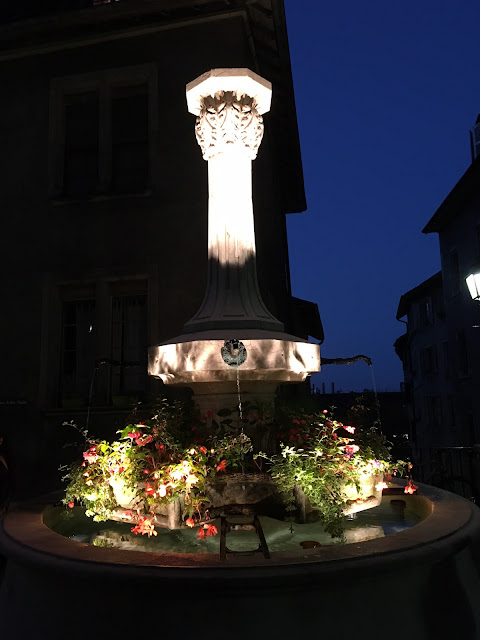 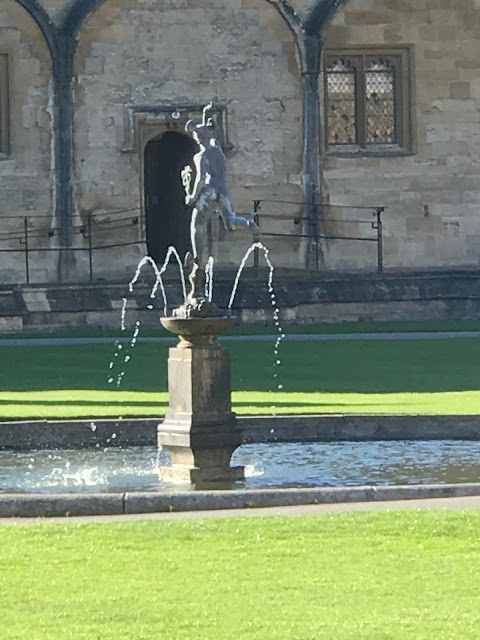 First two from Switzerland, last one in Oxford, UK.


They said they will have a website, with all information uploaded, they want all e-mail to go through Liz Marrinnan, they will hold a public meeting on June 12th.

May 23rd, there will be a walk to the site, meeting at 8:00 a.m. at Martine's at the Village Center and on May 31st a meeting of the Steering Committee prior to the June 12th public workshop.

The final report will be produced by February, 2018.

Fail to grasp the need for 10 lavatories...Unless you have 10 kids with dirty hands in Scarsdale schools... 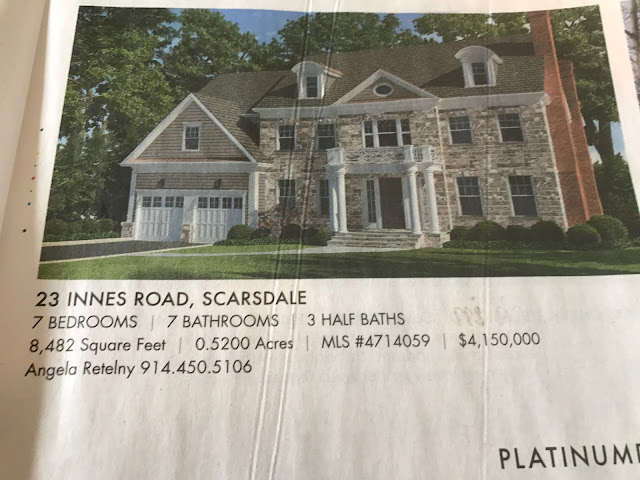 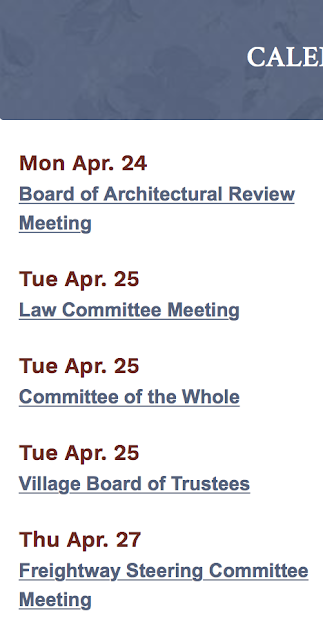 For further details, you can log on to Scarsdale.com.

Earth day Tips from NY DEC and Compost in Scarsdale

We have ( so far, and for the foreseeable future ) only one Earth.

Let us take care of it.

The compost give-away in Scarsdale was very successful. So successful that when I arrived at 2:00 p.m. I was informed there was none left. All was gone by 12:30 p.m. and starting at 8:00 a.m. there was a line of cars and a steady stream of compost seekers.

Michele Sterling informed me they will have another compost give-away day.

Dumpster there, Thursday ready to go to a dump site somewhere... 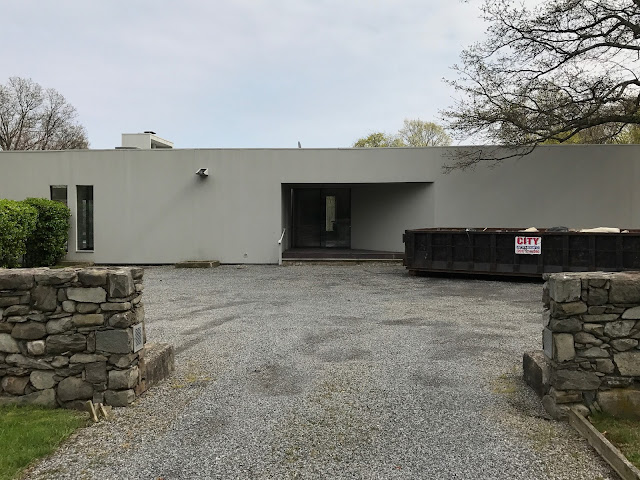 All is not bleak. Spring in the garden: 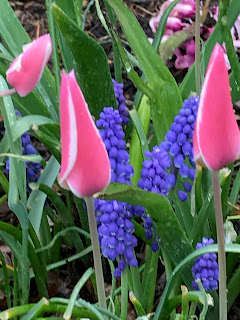 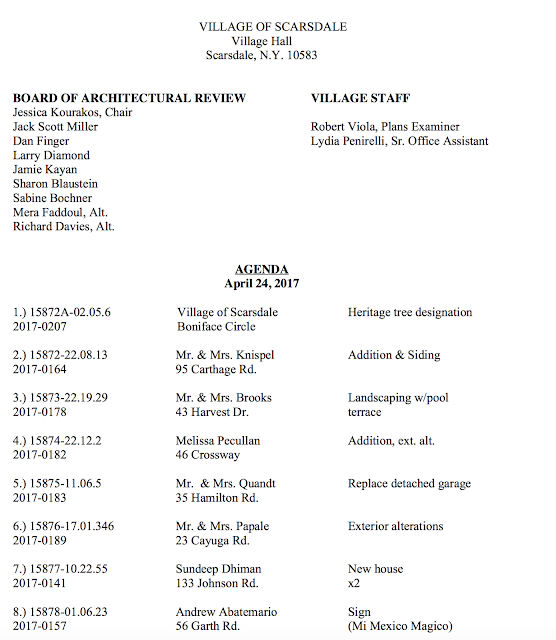 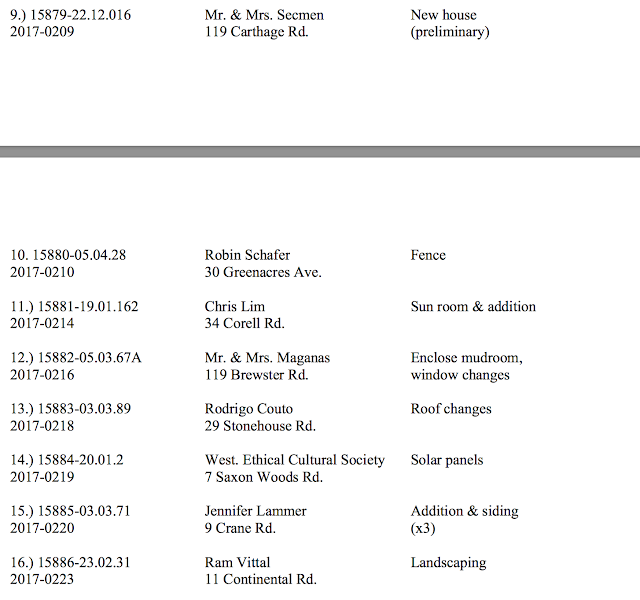 Leave it on the Lawn

How do you dispose of grass clippings after mowing the lawn? Do you...

Why not try to "Leave It On The Lawn!" It will:

Why You Should "Leave It On The Lawn." How do you dispose of grass
clippings after mowing the lawn?

Benefits the environment by reducing the amount and frequency of fertilizer application. Grass clippings are 80% water and contain 2- 4% nitrogen, phosphorus, potassium and other nutrients. This is also good for you (lower fertilizer costs).
Improves your lawn. Leaving grass clippings on the lawn returns nutrients to the soil resulting in healthier turf.
Saves time. Since the grass is no longer bagged, fewer stops are required.
Reduces the amount of garbage you throw out. Grass clippings can account for as much as 10% of the garbage we produce.

How To "Leave It On The Lawn"

Allow your grass to grow to three inches and then cut no more than one inch off the top. This is the "one-third" rule. This helps develop a deeper root system which is a natural defense against weeds, disease and drought.
During fast growing periods you may have to cut the grass every four to seven days

1. Do grass clippings cause thatch?
No. Thatch is an accumulation of the "woody" parts of the grass plant: stems, roots and stolons, not the clippings. Thatch is most often caused by over-watering and over-fertilizing.
2. Isn't it more work to mow the lawn often enough to keep the clippings short?
No. Cutting grass before it is overgrown is easier and faster. Eliminating the time and effort it takes to bag clippings further shortens the mowing time.
3. What if my lawn grows too high between mowings to leave the clippings?
You have several options. You may mow over the clippings to further shred and scatter them. You may raise the mower height so only the top third of the grass blade is removed and then gradually lower the mower height over the span of several mowings.
4. Do I need a mulching mower?
No. Mulching blades and adaptor kits are available for many types of lawn mowers. When it is time to replace your mower, consider purchasing an electric mulching mower.

Studies have shown that grass recycling reduces the need for fertilizer by 25%.

Do You Compost Yard Debris?

If you don't want to leave grass clippings on your lawn, try backyard composting. Composting your organic wastes in the backyard is simple and beneficial. There are many methods to backyard composting ranging from a simple pile to a purchased composting bin.
For more information on "Leave It On The Lawn" or backyard composting contact: NYSDEC Bureau of Waste Reduction and Recycling 625 Broadway Albany, NY 12233-7253 (518) 402-8706 Or E-mail us at: recycling@dec.ny.gov Or contact your local Cornell Cooperative Extension Office.