Letter(s) to the Inquirer and Response (s)...

Friday,  April 6th upon reading the Inquirer I finally had to send not one, but three  e-mails to the Editor. One was perhaps more personal than others, but none have been published, yet.

Once again. No reply either...

So for you my readers all over the world, here is my letter to the Inquirer with minor modifications:

This is a piece I wrote in 2017 that is featured on my website below.
In response to Mayra’s letter this week.

This has eluded me for a long time before it was finally clear. I could not solve the Scarsdale riddle.
We have very high taxes in Scarsdale, right ? We also have volunteers performing many of the job(s)  that in other municipalities hired professionals cover. Imagine everyone from the Mayor to the Village Board members to the CHP, BAR, Planning Board, etc.  is a paid professional in other towns.
Imagine how much the payroll would then be if we had to pay competitive salaries to all...Millions of dollars in our budget. Imagine how high our taxes would be with this additional cost ? But we do not have this this additional cost, volunteers do not get paid. Our taxes should be lower than other towns' taxes, right ? Wrong. Our taxes are higher. So, what is going on ?
Are these so called not-paid residents sitting on all those boards providing us a service or are we providing them a service ?
A free internship. They get to make decisions, learn how a town functions at our expense. We pay for their tuition. They look like they are "serving". We are paying for their tuition, they are learning at our expense. Dearly. No wonder this was formulated by lawyers, no wonder there is no other town like this. Only in Scarsdale.
No wonder most who serve are lawyers as well, no wonder lawyers have such a bad reputation in the US.
This has to STOP !
Paid professionals should serve, who do their job not volunteers who learn on the job and use and abuse this community. They "serve", we become a line on their resume, they get a better professional position because of their Scarsdale experience... There are of course a minor number of exceptions to this...
They have sugar coated their formula with words like civic-duty, volunteerism, community service, etc. But what they are doing is selfish and self-serving all the while appearing altruistic. The job is daunting. On top of their regular day jobs they moonlight trying to " serve"...
They are crushed. They cannot follow all the nuances and ramifications. At the end they nod to the Staff, they sign and move on. Unless there is finally someone like Trustee Callaghan who can see the light, who dissents. But laws still move on, the majority nods. No, most are like sheep following other sheep. " Les moutons de Panurge"...
There is no free lunch - once again. The ones who " serve" are hurting themselves too. They are passing laws that do a disservice to the community. They know they have to deal with this real-estate issue, the preservation issue, but they don't, they can't. They are hurting, we are hurting.
Time to say " Enough".
( The above entry was sent to both the Scarsdale Inquirer and Scarsdale10583.com. Neither published it so far, wonder why... )


Nothing in Scarsdale makes sense, including the CNC !
Planning just plans for more building, Historic Preservation meets to demolish homes from the 19th century, volunteers serve on boards that ultimately hurt their own Village. But fret not, they move shorty after they have “served” here…
ZBA will approve an Eiffel Tower in your yard, if they can raise your taxes…Voila, Scarsdale in three sentences !!!

The BAR even though its mission statement states the following:

The mission of the Board of Architectural Review is to preserve and promote the character and appearance of buildings within the Village of Scarsdale.
The Board of Architectural Review meets twice per month to consider applications for exterior alteration of existing buildings, exterior appearance of new buildings, signage and some fencing and impose design conditions to ensure that buildings are designed in harmony with the neighboring community.

Regularly and consistently approves buildings in disharmony with their surroundings.
Here is just two samples in construction now: 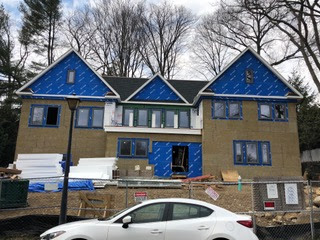 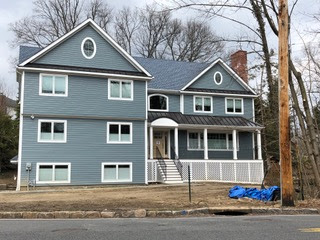 The above two in construction now on Tisdale and Crane Roads.

The one below view of backyard from the  9 Crane Road property. 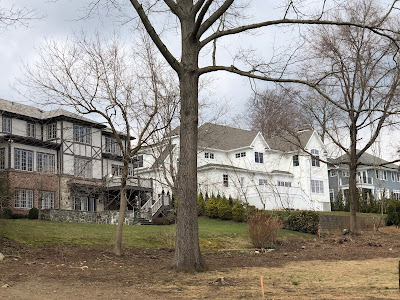 Close to the train station, and houses are getting jam packed.